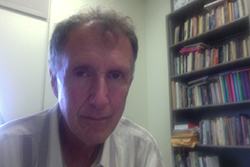 Stephen-Paul Martin has published over twenty books of fiction, poetry, and non-fiction. He is currently completing a new book of stories based on the assassination that triggered World War I. One of his short story collections, The Gothic Twilight, was nominated for the National Critics Circle Fiction Award in 1993. His most recent collections of fiction are Changing the Subject (Ellipsis Press, 2010) and The Possibility of Music (FC2, 2007). From 1980-1996 he co-edited Central Park, an internationally acclaimed journal of the arts & social commentary. His writings have appeared in over 200 periodicals over the past 30 years, in several different languages. He received his doctorate from New York University in 1983.