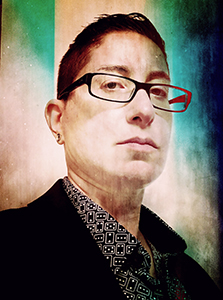 Yetta Howard | Y Howard (Ph.D., University of Southern California, 2010; M.A., Mills College, 2002; B.A., Boston University, 1998) is Professor of English and Comparative Literature at San Diego State University. An expert on underground cultures, Dr. Howard specializes in sexuality studies, gender studies, queer theory, and feminist theory in the context of visual, auditory, and corporeal forms, and with an investment in experimental and avant approaches to 20th- and 21st-century textual practices and minority discourse. Howard publishes extensively on and is an educator of cinematic, sonic, graphic, performance-based, and bodily phenomena.

Howard is the author of Ugly Differences: Queer Female Sexuality in the Underground (University of Illinois Press, 2018) and the editor of Rated RX: Sheree Rose with and after Bob Flanagan (The Ohio State University Press, 2020). Some of Howard’s work also appears in American Literature; Social Text; Sounding Out!; TSQ: Transgender Studies Quarterly; The Journal of Popular Culture; Women & Performance: A Journal of Feminist Theory; Fiction International; The Middle Spaces; and in the volumes Disability and Art History from Antiquity to the Twenty-First Century; Keywords for Comics Studies; The Comics of Alison Bechdel: From the Outside In; On the Politics of Ugliness; and Survival of the Sickest: The Art of Martin O'Brien. Howard is also at work on a new book project, "Erratic Erotics: Experiments in Sexuality and Mortality." A photographer working in both analog and digital forms since the 1990s, Howard has had exhibition activity throughout California. For more info: yettahoward.com.