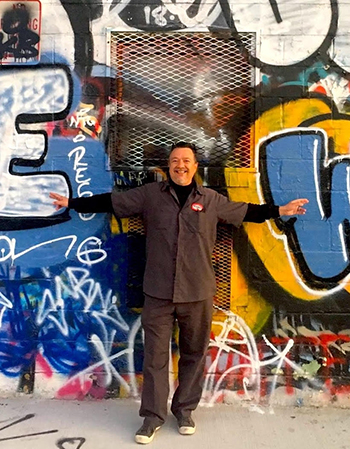 The Director of San Diego State University's longest-running Interdisciplinary and Cultural Studies graduate program, MALAS (the Master of Arts in Liberal Arts and Sciences program), William Nericcio is Professor of English and Comparative Literature at SDSU, where he also serves on the faculties of Chicana/o Studies and the Center for Latin American Studies. Nericcio's first book, Tex[t]-Mex: Seductive Hallucinations of "Mexicans" in America, appeared with the University of Texas Press in February 2007. His next book, an edited anthology of playwright Oliver Mayer's early works entitled The Hurt Business appeared in April of 2008 and his follow-up to that, Homer from Salinas: John Steinbeck's Enduring Voice for California, on the work of John Steinbeck (with a strong California focus), appeared in March, 2009. Publishing in various fields across the humanities and social sciences, Nericcio is the author of noteworthy essays including his lurid meditations on the life of Pee-wee Herman (aka Paul Reubens) in the Iowa Journal of Cultural Studies and an illustrated survey of the cool comic Mestizo stylings of Gilbert Hernandez and his spiritual godmother, Frida Kahlo, for NYU Press's Latino Popular Culture. Links to these works and more are available on his World Wide Web Mothership while his latest blog entries on stereotypes and American mass culture can be found on The Tex[t]-Mex Galleryblog and at mextasy.blogspot.com. Lastly, Nericcio's latest books, Talking #browntv: Latinas and Latinos on the Screen, co-authored with Frederick Luis Aldama (December 2019), for the Ohio State University Press and Cultural Studies in the Digital Age: An Anthology of 21st Century Interdisciplinary Inquiries, Postulations, and Findings for Hyperbole Books, co-edited with Dr. Aldama and Italian semiotician Antonio Rafele (January 2021), are now in print.  Learn more about Dr. Nericcio published work on Amazon.com and Academia.edu.